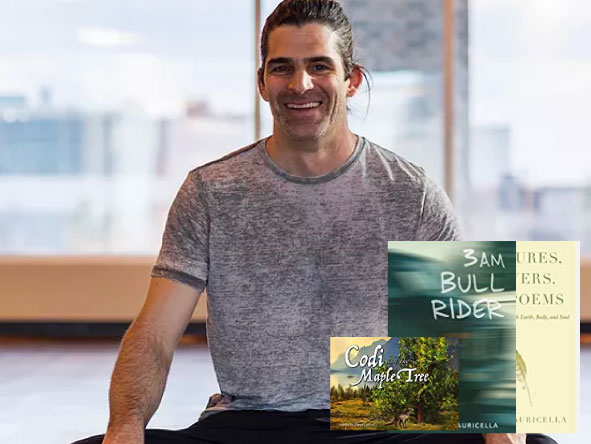 Joseph Lauricella rescued a wolfdog named Codi, from a shelter in the late nineties. After some tribulations he drove Codi across the country to place him in a wolf refuge in Colorado. Joseph loved Codi so much, he couldn’t leave him, so they both stayed and lived with 42 other wolves with no electricity or running water for a year. Codi and the Maple Tree is a children’s book inspired by Codi and the wolves. In addition to being an author, Joseph is a master yoga teacher and bodyworker, which inspired him to write and publish: Postures, Prayers, and Poems: A Yoga Journey Through Earth Body and Soul. Joseph’s first book is a memoir published in 2013 about living on the road in a van after college. 3AM Bull Rider takes the reader on a cross country journey in 1995, before cell phones made the world smaller. Joseph currently lives in Chicago with his two Chihuahua Yoga dogs and is working on his next book.

Codi and the Maple Tree

Codi is on a mission to find a new den for his wolf pack when a seed pod from a maple tree falls onto his back, making him very uncomfortable. Codi’s pack helps him remove it and mother nature carries it to a location where the maple seed takes root. Generations later, Codi’s pack has grown in numbers and the seed pod has developed into a majestic maple tree that is an heirloom for all to share. Codi and the Maple Tree is a beautiful story about purpose, growth and connectivity.

After college, when most people begin searching for a career or a job, Joseph Lauricella wanted to free wheel across America. 3 AM Bull Rider will transport you back to 1995, before smartphones and iPads ruled the world. With an attitude like the Beat Generation, he explored the darkness inside caves and the majestic beauty of canyons. He met ravens, rams, bikers, and hitchhikers. When you read 3 AM Bull Rider it will feel as if it only happened yesterday.

Postures, Prayers, and Poems: A Yoga Journey Through Earth, Body, and Soul

Postures, Prayers, and Poems tell a story from the heart of yoga to the heart of the yogi, or anyone who accepts the invitation to read this book. Many books exist about yoga postures, alignment, and spirituality, but Lauricella uniquely shares and applies his experience of yoga, Native American spirituality, Eastern philosophy with the west’s deep reverence for the natural world. Postures, Prayers, and Poems was written as a companion for yoga teachers, practitioners, and those who want to journey into the heart. The book asks that you too look deeply into your own being and hear the earth speak through these poems and acknowledge that you already are yoga; a perfect blend of ancient wisdom, intelligence, and intrinsic beauty. Postures, Prayers and Poems beckons us to take better care of ourselves, our children, and our planet.About the AuthorJoseph Lauricella received his bachelor’s degree in Sociology from Oswego State University before attending the New Mexico Academy of Healing Arts in Santa Fe, NM. He is a Licensed Massage Therapist, Registered Yoga Teacher, educator, and author. As an intuitive bodyworker and yoga teacher he has literally worked with thousands of people through the years. In 2008, he founded the Arizona School of Yoga and Arizona Power Yoga studio in Tucson before successfully selling the business and relocating to Chicago. As an educator, Joseph continues to teach regular yoga classes, lead yoga retreats and workshops. He has a deep reverence for the human body and spirit, and is passionate about teaching yoga in the Great Tradition. As an author he self-published a memoir titled, 3AM Bull Rider in 2013 receiving many five star reviews. Joseph recently completed a children’s book and a yoga poetry book titled Postures, Prayers, and Poems.