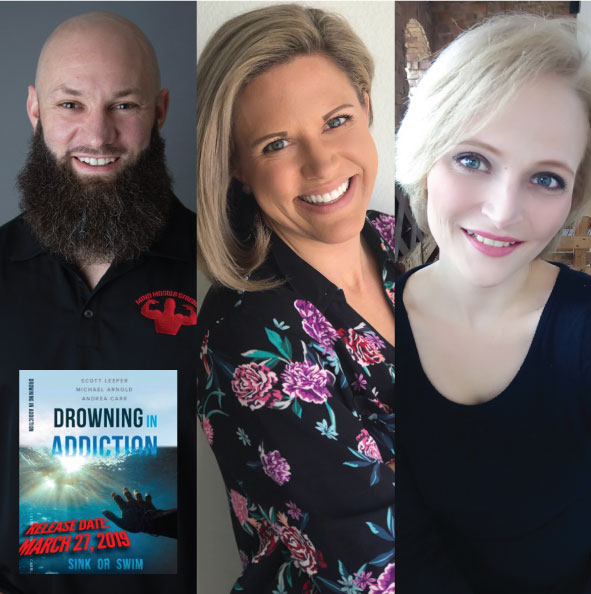 Drowning in Addiction: Sink or Swim is a book about saving lives and giving hope to addicts and loved ones of addicts. We, the authors, believe this book is a lifeline for those affected by addiction to find their path to recovery. We believe recovery is possible, regardless of background or situation. It begins with a choice!

To the addict/alcoholic reading this book, we love you and respect you. We get you, we see you. We know you. We have been you. We want to help you. We, the authors, have faith these stories will speak to you and inspire you to change and lead a better life. Your addiction is not shameful. Your addiction is the chapter of struggle in your book of life before your story turns into a success.
To family and friends of addicts that will read this book, we want to bring awareness to the fact that you do not need to feel guilt or shame for your loved one’s challenges through addiction. The goal of this book and the stories within is to help you, the loved one of an addict or alcoholic, to realize your actions are not in vain; however, being present for your loved one may be the best course of action. Your loved one must make the decision to be the change for themselves.
This book is about us, for others.

Scott Leeper is a Certified Health and Life Coach. He lives in Mishawaka, IN with his wife, Ashley, and 6-year old son, Jaxson. Scott served in the United States Marine Corps (2001 – 2014), where he served as a heavy equipment operator for the first 9 years of his service. In 2009, he became a Marine Criminal Investigator until he left the Marine Corps in 2014.

In 2012, Scott made the tough decision to take his father, Scott Leeper, Sr., off life support and watched him pass away on May 19, 2012. Scott’s father battled alcohol addiction for the majority of his adult life and it would be the addiction that would ultimately cause his demise. Scott suffered severe mental trauma after his father’s death and had to reinvent himself after leaving the Marine Corps in 2014.

After the end of his service, Scott knew he wanted to help people, but did not know what that looked like for him. His first job after the military was in the staffing industry. Quickly realizing he was not fulfilled in this job, Scott started working for the Salvation Army. While working for the Salvation Army, Scott conducted motivational speeches for the men in the rehabilitation center that was ran by the Salvation Army in South Bend. During his speeches, Scott spoke to men with various levels of addiction, without sugar coating the realities of addiction. After the speeches, men told Scott that he spoke to them on a level that nobody has ever spoke to them on. Soon the rehabilitation center closed, and Scott found himself unfulfilled in his job again.

During a third job, Scott began competing in bodybuilding competitions, and within a year, became a certified personal trainer. As a trainer, Scott worked tirelessly to help people get the physical results they were looking for. However, Scott suffered a revolving door of clients. He began to understand the missing link. Scott understood that, unless his clients make a mental shift and begin to be dedicated to healthy habits and a healthy lifestyle, their motivation would soon disappear. Once the motivation to be healthy is gone, the client stopped showing up for themselves.

With this realization in mind, Scott received his certifications for Health and Life Coaching. Scott is now the owner of Mind Muscle Strength, where he coaches people on the physical and psychological aspects of healthy living, to include, diet, exercise, relationship with high power, relationship with self, stress mitigation, and reduction of depression and anxiety. Scott also uses his coaching skills with people that have been addicted to substances in the past, or the family members that have been affected by addiction.

Michael Arnold is a hurricane of happiness. She went through her own personal transformation with brutal alcohol addiction that was partnered with fear of judgment, acceptance, no self-love and identity loss. Michael captivates her clients with her own vulnerability by being raw and real about highs and lows of evolving and transforming in sobriety. Michael now lives a beautiful, healthy life in sobriety. Michael can truly say she now knows what it is like to feel alive, free, and to be unapologetically herself from the inside out. It is Michael’s passion to inspire and support people to Make Shift Happen in their lives. Michael truly believes it starts with self-love. Loving yourself enough to do the work. It is Michael’s desire to have her clients go from empty to empowered.

Michael uses the Transformational Coaching Method to have her clients transform their beliefs, which, is your identity. Michael doesn’t trim branches off trees, she uproots her clients entire belief systems to plant new systems that support the lives her clients want to live. Michael digs deep into why her clients have the beliefs they have now that leave them feeling empty, living in fear of acceptance and belonging, and not being able to love themselves. Michael determines why these beliefs will no longer serve them in sobriety and their new way of life. Her clients then work to create new beliefs that empower and support their sobriety and recovery. Michael knows it is imperative to do this work because if you simply trim branches, they will eventually grow back. You need to get to the root of your beliefs so you can have the sustainable change and be successful in your sobriety.

I became a Sober Coach because after I got sober myself, I realized how much easier my own sober journey would have been if I had worked with a Sober Coach from the beginning. I’ve been in recovery for over six years, and in November of 2018, I have three years of relapse-free sobriety, and almost two years free from disordered eating.

The horrors of alcoholism and eating disorders led me to the path I am on today, where I am helping others improve their lives in sobriety – and I couldn’t be more passionate about the work I do. I have been where you are now. I struggled for years to get and stay sober and healthy, and once I did, I had no idea what to do next with my life.

I had to reinvent myself, starting from the inside: Who I BELIEVED I was, and who I DESIRED to be. I wanted to be healthy, confident, fulfilled, happy, and free. Those things were so far from who I was when I was in active addiction – incredibly unhealthy, insecure, fearful, anxious, depressed, and in bondage.

What finally clicked for me was my MINDSET around drinking needed to change. Almost three years ago, I made the commitment to choose life-long recovery. Now I help my clients to do the same. (view website)